Employee turnover is usually on the list of metrics HR functions and organisations use on the people function. Whether the turnover rate is high or low, the causes can be numerous and complex and in the case of high turnover the organisation may want to take action. These learning resources explore the subject of employee turnover, including why people leave, and investigates the different retention strategies available.

In the audio clip (to the right) your HR tutor Andrew gives an overview of the content and below is a summary of how this fits with the specific intermediate and advanced CIPD units.

1. Why do people leave organisations?

Employees resign from organisations for many different reasons.  On occasion it is the attraction of a new job or the opportunity of a period outside the workforce that ‘pulls’ them. Sometimes employees are ‘pushed’ to seek alternative employment, perhaps because of dissatisfaction in their present jobs  For example, an organisation may have a flat organisational structure, with few chances for employees to take the next step up the career ladder, and therefore it may seem that there is no other choice, and the employee is ‘pushed’ to leave.  If employees feel that they cannot perform the job well enough through lack of training and development, or there is no opportunity to develop the role then employees may feel less engaged and start looking outside the organisation. Opportunities to develop new skills or offers of promotion from another organisation may entice employees away.

In high-turnover industries especially, a large proportion of employee turnover is made up of people resigning or being dismissed in the first few months of employment. Poor recruitment and selection decisions, by both the employee and employer, are typically to blame, together with badly designed or absent induction plans. Expectations are also often raised too high during the recruitment process, resulting in people competing for and then accepting roles for which they are in fact not right for.

Employee turnover, sometimes known as ‘labour turnover, ‘wastage’ or ‘attrition’, is the rate at which people leave an organisation.

Turnover can also be:

There’s no fixed level at which turnover begins to have a negative impact on the organisation.  Much depends on the type of labour markets in which the organisation competes. However, turnover can present a problem where:

By contrast, when the labour market is ‘loose’ and where finding and training new employees is relatively quick and low cost, sustaining high quality levels of service provision may be possible despite having a high turnover rate. For more information on labour market factors and their impact on organisations, see this clip on YouTube.
Some employee turnover may benefit organisations, for instance, when a poor performer is replaced by a more productive employee or when a senior retirement allows the organisation to gain ‘fresh perspectives’. Moderate levels of staff turnover may also help to reduce staff costs in organisations where business levels are unpredictable month-on-month. When business is slack, it may be possible to hold off filling vacancies for some weeks.
Employee turnover tends to reduce as the national economic situation becomes more difficult.  If jobs are easy to find employees are more likely to seek new employment and conversely if there are fewer available jobs they are less likely to leave, although often other factors outside the organisation’s control also influence turnover, for example family commitments mean that employees may need to leave.

Turnover and its cost need to be measured in order to forecast future losses for planning purposes and to identify the reasons that people leave the organisation. Plans can then be made to address the problems causing unnecessary turnover and to reduce costs.  There are a number of different ways of calculating turnover.

The employee turnover index is the traditional formula for measuring turnover:

This formula may be simple to use, but it can be deceptive. The main concern is that the percentage may be inﬂated by the high turnover of a relatively small share of the work-force, especially in times of heavy recruitment.  Also, the total figure makes no distinction between functional and dysfunctional turnover.

Overall turnover figures are often used in published surveys of labour turnover because they tend to be more readily available and can be useful as a basis for benchmarking against other organisations. However, calculating a separate figure for voluntary turnover – specifically, resignations – can be useful.

It may also be helpful to consider some of the more complex employee turnover indices which take account of characteristics such as the stability index or measures of seniority and experience.

3. The cost of employee turnover

In the previous section we referred to some of the problems caused by employee turnover but what exactly are the costs?

On the right is a link to the CIPD’s 2020 Resourcing and Talent Planning survey. Use this to find the following information:

*We’ll be using other sections of this report later on. 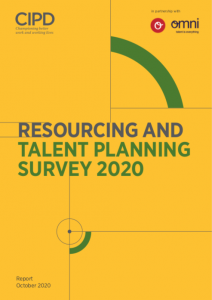 As you might have guessed, the cost of employee turnover goes beyond the cost of recruitment.

Spend some time thinking through what these other costs might include and make a list. You may find the following categories prompt your thinking:

It’s important to consider the indirect costs of someone leaving as research from the 1990s found that the ‘visible’, that is, direct, costs of recruitment accounted for only 10 to 15 per cent of total costs. By far the highest costs were associated with the inefﬁciencies arising while the post was vacant (33 per cent) and the inefﬁciency of new workers (32 percent).

The following factors are put forward for consideration when calculating costs:

The first step in improving retention is to establish why people leave in the first place. Whilst this isn’t a retention strategy itself, determining the reasons for turnover, referring to the push and pull factors covered earlier, can help organisations target their efforts. Diagnostic tools that might be used for analysing turnover include:

The CIPD (2020) recommends organisations should consider the following elements, all of which have been shown to play a positive role in improving retention:

Let’s go back to the CIPD’s 2020 Resourcing and Talent Planning survey to see what methods organisations are actually using. Look at the section on Talent Management, Retention and Turnover (page 31 onwards) and make a note of the following:

Each of the methods we’ve looked at come with strengths and weaknesses, which organisations should take into account when considering their use. Carry out the following steps to explore some of these:

Once you’ve completed this, listen to Andrew exploring the strengths and weaknesses of one of the methods.

Listen to "Strengths and weaknesses - debrief" on Spreaker.