The role of line managers in coaching and mentoring

Surveys regularly show that coaching and mentoring is often carried out by line managers. Does this seemingly low cost and convenient way of delivering coaching and mentoring have any downsides? These learning resources explore the role line managers take, the challenges and how these can be addressed. In the audio clip (to the right) your HR tutor Andrew gives an overview of the content and below is a summary of how this fits with the CIPD units.

Listen to "The role of line managers in coaching and mentoring - introduction" on Spreaker.

1. The line manager as coach

Clutterbuck (2004) states that one of the main responsibilities of a line manager the staff that they have responsibility for. Clutterbuck further argues that coaching and mentoring are two of the most powerful ways of supporting the development of other people. However, there was also an acceptance that whatever approach was followed there were potential conflicts and tension in being line manager and also coach/mentor in the same work setting.

This issue about the role of the line manager is important as findings from ILM – Creating a coaching culture reported concluded that according to its survey findings 53% of line managers undertook internal coaching and 46% coached individuals within their own business area.  The CIPD Learning and Development Annual Survey Report 2014 shows that 76%of organisations offer coaching or mentoring, although this rises to 85% of the public sector and is also more common in larger organisations.  Coaching by line managers is more popular than coaching by external practitioners and coaching by line managers is particularly popular in the private services sector.

A key challenge for a line manager is deciding which the most appropriate response in the circumstances is. Getting these decisions wrong and missing those vital coaching or mentoring opportunities can make a huge difference to working relationship with the individual concerned and the wider team in terms of its effectiveness of the team.

As a HR practitioner it is important that there is a clear understanding within the function about when each type of intervention is appropriate and perhaps even more critically having the right skills and knowledge and level of support. It should not be assumed that being a line manager automatically makes someone a good coach or mentor.

Coaching and mentoring is a skill that line managers need to work on and develop and to achieve consistency and maintain quality an appropriate support structure is needed. The line manager needs to be fully equipped for their coaching or mentoring role and recognise that time commitment involved in mentoring is likely to much longer than in coaching situation. In a coaching scenario, there will be a focus on specific goals or short term issues in contrast to a mentoring situation where the relationship is likely to be much deeper and take place over a longer period of time in order for it to be effective.

It is important to consider that coaching or mentoring may not be the right solution for everyone and other interventions may be more effective in improving individual performance, particularly if they are not willing participants in the process.

Coaching at the Sharp End

Anderson, V., Rayner, C. and Schyns, B. (2009) Coaching at the sharp end: the role of line managers in coaching at work, London, CIPD. 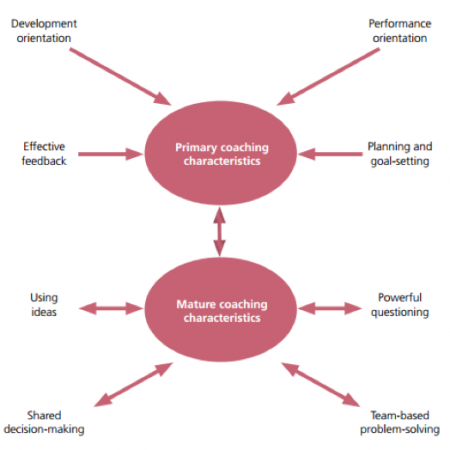 In the last few years results from a couple of CIPD surveys have raised questions around the effectiveness of coaching and mentoring delivered by line managers.

The CIPD The Coaching Climate Survey Report 2011 shows the different people involved in coaching in organisations and how this has changed since the previous survey in 2009. It’s clear from this that the role of line managers has reduced from 37% to 32%.

The CIPD Learning and Development Annual Survey Report 2014 shows a decline in the proportion of organisations ranking coaching by line managers among their most effective L&D methods has continued. 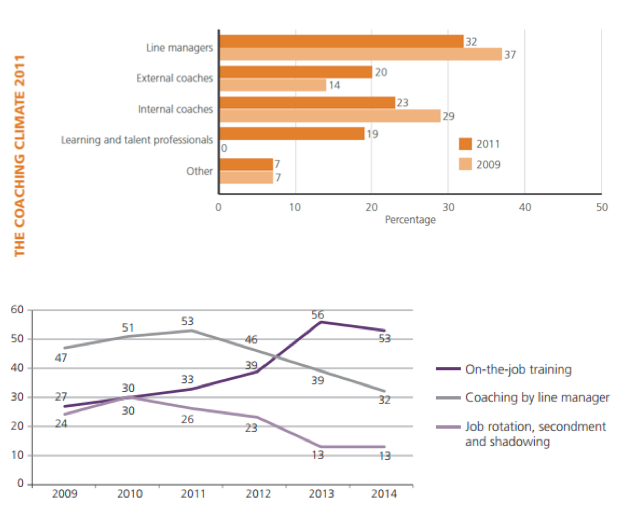 Questions about the effectiveness of the line manager as coach highlights that there are challenges. To the right you will find a links to an article by David Clutterbuck. Read this and make a note of the points that stand out for you.

Once you’ve done this listen to the debrief from your tutor. 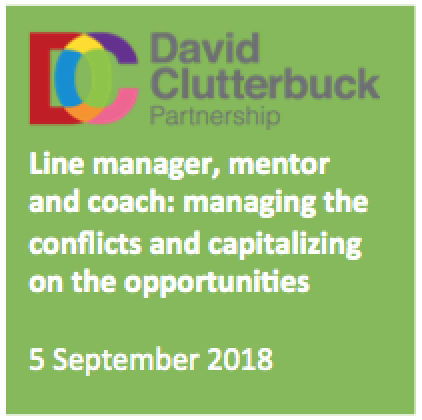 A study for Oxford Brookes University by Philip Ferrar (2006) identified a range of behaviours and habits that intensify problems in the dynamic between line managers and their teams. Among these are:

Ferrar, Philip (2006) ‘The Paradox of Manager as Coach: Does being a manager inhibit effective coaching?, thesis submitted to Oxford Brookes University.

The CIPD report (Anderson et al, 2009) Coaching at the Sharp End identified the drivers and inhibitors of a coaching style of management. The diagram on the right displays these.

Anderson, V., Rayner, C. and Schyns, B. (2009) Coaching at the sharp end: the role of line managers in coaching at work, London, CIPD. 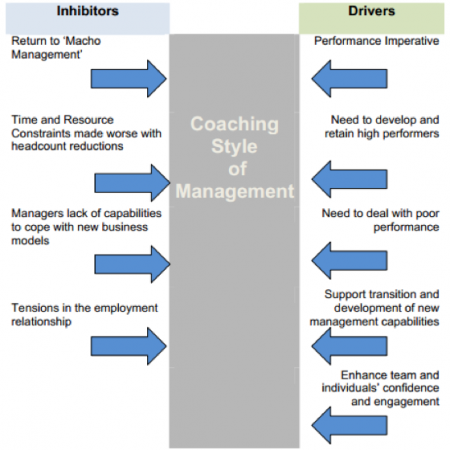 It’s important that the line manager understands their role in making the coaching work, and does not simply see it as an easy way to pass on responsibilities for supporting staff development. Managers should set an example by taking the coaching activities seriously and encourage the individual to spend time and effort thinking about their development and onward career plans. HR practitioners need to explain that as part of their role in supporting any coaching or mentoring  initiative, the line manager should:

Conveying these messages and ensuring managers take them on board is a key activity for HR practitioners as it can have a real impact on the likely success of a coaching/mentoring initiative.